a candle in the quarry ..a modern Grimm Fairy Tale 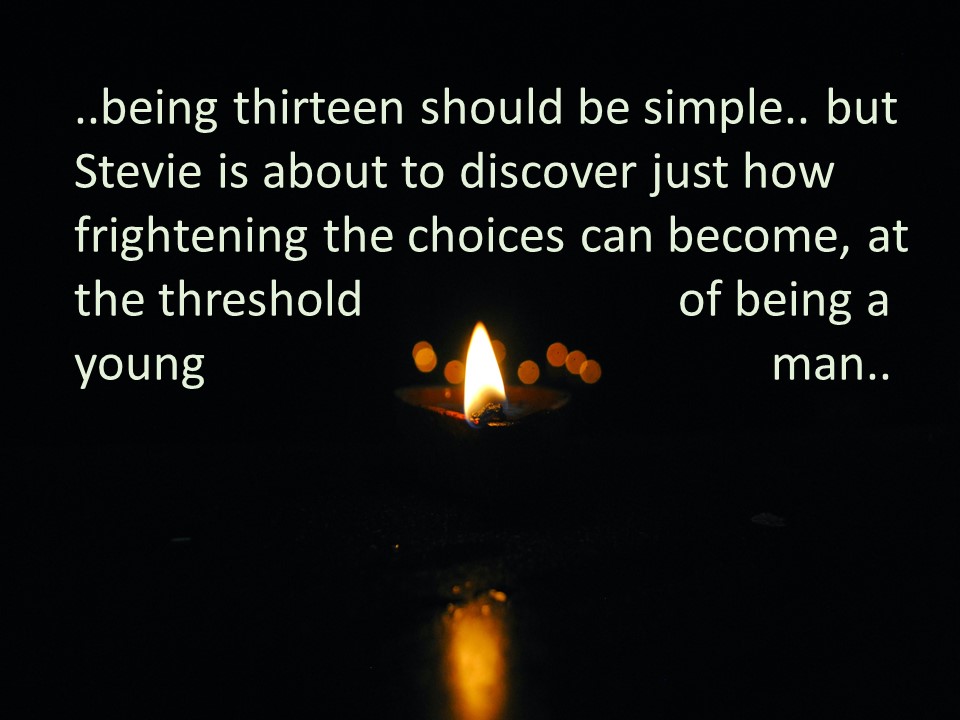 ..being thirteen should be simple.. but Stevie is about to discover just how frightening the choices can become, at the threshold of being a young man..

Written for my cousin’s kids who, at the time were 8, and 12..  a candle in the quarry is a modern day ‘Grimm Fairy Tale’ of their very own..!

..Over the years, the heightened pageantry of 'Grandma's Visit' never failed to annoy Stevie.

It was a family performance that had begun with his birth and fastened into repetitious tradition with the arrival of a brother -then a sister.

It had evolved into a family pantomime; stacking the children in the foyer, to let the witch inspect them for another year's growth.

She would start with Stevie's baby sister, six years old -and already so full of herself that he constantly contrived new ways of torturing the girl.

The old woman would fold lower, over the child, as three brittle fingers would reach out to pinch the girl's cheek.

The one good thing Stevie could say about his sister was that she always shivered so obviously at that.

His mother would be standing as the shadow, looking comically anxious -nodding appropriate, silent, big-eyed responses, behind the old woman's back.

His father would be at his mother's elbow -glowing.

The old hag would next hitch up to Stevie’s younger brother. She'd duck her head back, and bulge her filmy grey eyes at him. She would follow this exhibition with the same exclamation every year: "This can't be my Bobby! How you've grown." The old lady would then motion at Stevie's father -never taking her eyes off poor Bobby.

What followed was the 'Presentation Of The Handbag' -and the big charade of scrounging for a quarter.

"I think I have something in here for my big boy," she'd say, scratching at the leather in the bottom of the cracked, worn bag. And -sure enough, after a few minutes of incredible suspense- she would retrieve a blackened quarter. Squeezing it between her thumb and finger, she would force Bobby to hold out his hand -and then plop the nasty thing in the center of his palm!

Stevie would just shake his head.

But 'Bobo' Bobby, his brother, would fall for it every time and reward the crone with a woozy grin of delight!

Then, the witch would sidle, crab like towards Stevie, her filmy eyes growing danker with every step.

"And Stevie.." She would gaze at him, as though pondering a field of fragrant poppies, and then press her sandpaper lips to his cheek.

Stevie would stand rigid to allow it.

"..My little boy." She would tilt back a half step

He was not a little boy.

He was no one's little boy. He was thirteen.

she would show up and toss the whole thing backwards!

But this particular year..

There were cherries for dessert.

Stevie rummaged his tongue over a pit in the dark between teeth.

His mother was babbling; his father was delving for another bowl of dessert; his sister was indifferently slapping at her food -while Bobby attempted to kick her in the shins under the table.

eyed his grandmother -rolling the cherry stone over and over his tongue..

to a look even more surprised..

by which Stevie found himself locked deep into the old woman's cataracts.

as they flicked, back

He could not bring himself to look away!

Sinking into her eyes, he grew afraid.

She was taking his vision

-yanking it, down towards her milky world.

The sounds of fear in the dining room, muffled into background noise as Stevie struggled to break free of her.. He felt himself scooped into a little point of thought, spun into a thread that she drew into her, and understanding that in the next second, he would be lost in that wet grayness behind her eyes, a whip crack of terror snatched his thought from her grip

-and the distinct "pop" of the cherry seed, was heard as it was expelled!

Through slowly focusing eyes, Stevie saw his grandmother smiling radiantly at him.

"Thank you little one," she said.

He excused himself from the table, and fled the room.

He felt the heft of the silence of the house..

Stevie turned to stare at his bedroom door.

He gathered clothes from his dresser, beside his bed, and dressed warmly, prepared to sit out in the cold of the quarry as long as he needed to – because he was going to unravel this mystery..

Dressed, Stevie was ready to leave his room, yet hesitated a fraction in reaching for the knob to his bedroom door, to swiftly consider that every creak and whisper that the house could use, it would, to announce the intention of his exit.

He would need to be especially careful.

Stevie quickly grabbed at the doorknob-

and was suddenly blinded by a flare of moonlight that turned the bedroom door into a brilliant sheen of bright!

His room was entirely consumed in pure, white light!

Sharp pain bore through his eyes-

lying in her bed across the hall.

Head turned in his direction.

He expelled the doorknob from his grasp.

the room was as it was-

in docile moonlight- and silence.

Stevie stood staring at his bedroom door, as the barest of whispers slowly played with his hearing.

and found himself alone.

He faced the door again.

A breeze softly slipped into the hollow of his right hand.

it raised his grip to the doorknob and left his fingers on the cold brass.

Stevie turned the knob, and carefully stepped out into the hallway.

His parent's room was to the left. Their door was securely closed.

Across the hall, where his grandmother was staying -that door, to the little spare bedroom, was also shut.

It was obvious no one was awake.

His little fright had just been a belch of guilt.

Stevie turned to head down the main stairs –

-reached out for the doorknob to his grandmother’s room - twisted it open, and unconsciously stepped inside.