Blues for a Royal Flush

Written as a work in two Acts, Blues imagines a journey of synchronicity upon divergent routes to platform for talented black music artists in the 1930’s, into 1960’s, through a segregated America, and further nuanced by caste, class, and gender.

Emerging from circumstances of Ellington’s prominence, this story is a riff on memory and music, speaking through the artistry of Ethel Waters, Ella Fitzgerald, Lena Horne and Billy Strayhorn – all, while in the orbit of Duke. 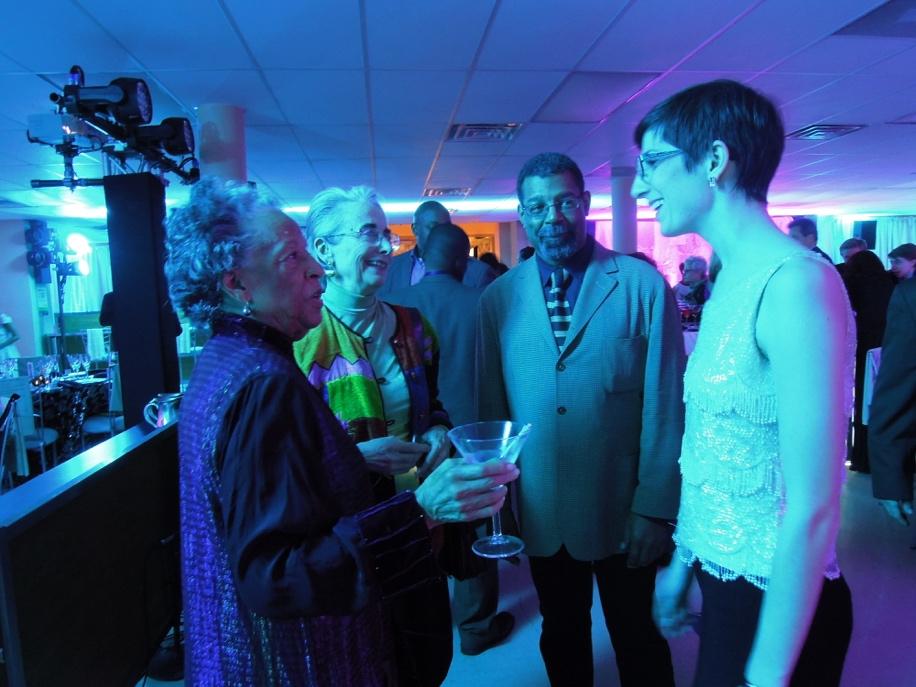 Blues For A Royal Flush is dedicated to my theatre godmother, Billie Allen-Henderson..

The work asks for ensemble performance of dedicated musicianship, from artists with jazz in hearts.. and an understanding that ‘journey’ is not about destination, but travel..

Commissioned in 2013, by Stanford in Washington (SIW), Blues was premiered at The Duke Ellington School of Art, in Washington, DC, in February 2014. For this premiere the cafeteria space was transformed into a 1094’s ‘dinner club’ 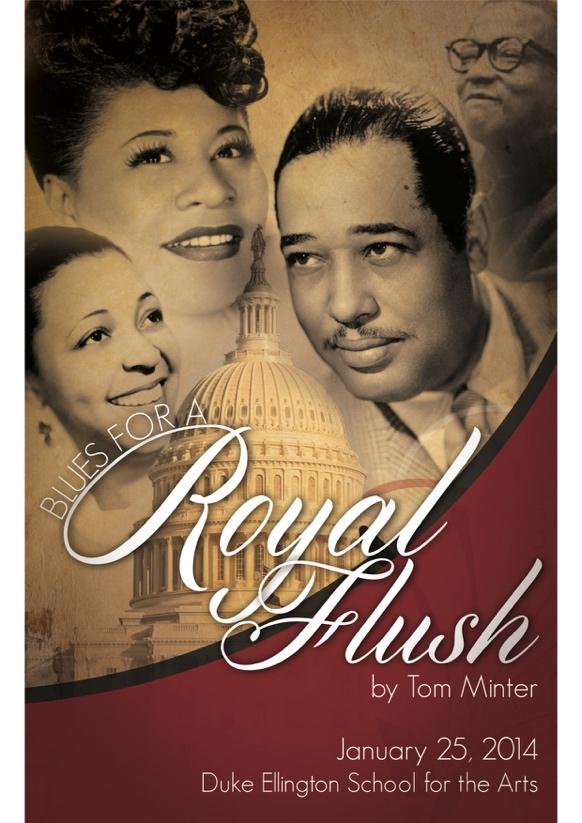 After its premiere Blues was presented in a joint production with SIW by the Smithsonian National Portrait Gallery, and performed in the McEvoy Theatre Auditorium on September 22nd, 2014.

*The 2017 performance of Blues was produced at the Kennedy Center, on the Millennium Stage. [*Due to venue time parameters of 60 minutes, these performances were given in presentation as an expanded Act II, running 55 minutes.]

**Education component / As a work commissioned by an institute of education, Blues facilitates a unique musical/theatrical enjoyment, but is also able to function as resource for various arts disciplines to collaborate in bringing a performance to full production, in that it's component parts, as script, can be set out as 'blueprint' to engage the appetites of Theatre, Visual Image, History, Museum Studies, and Playwriting Track students, from high school, up through university.

Work for the premiere of Blues allowed for Duke Ellington School for Arts (DESA) seniors to be mentored by professional Creative Visual Artists, Nekisha Durrett, E. Samantha Chang, and Polly Hollis, in their creating the visual image sequences utilized in the performance. 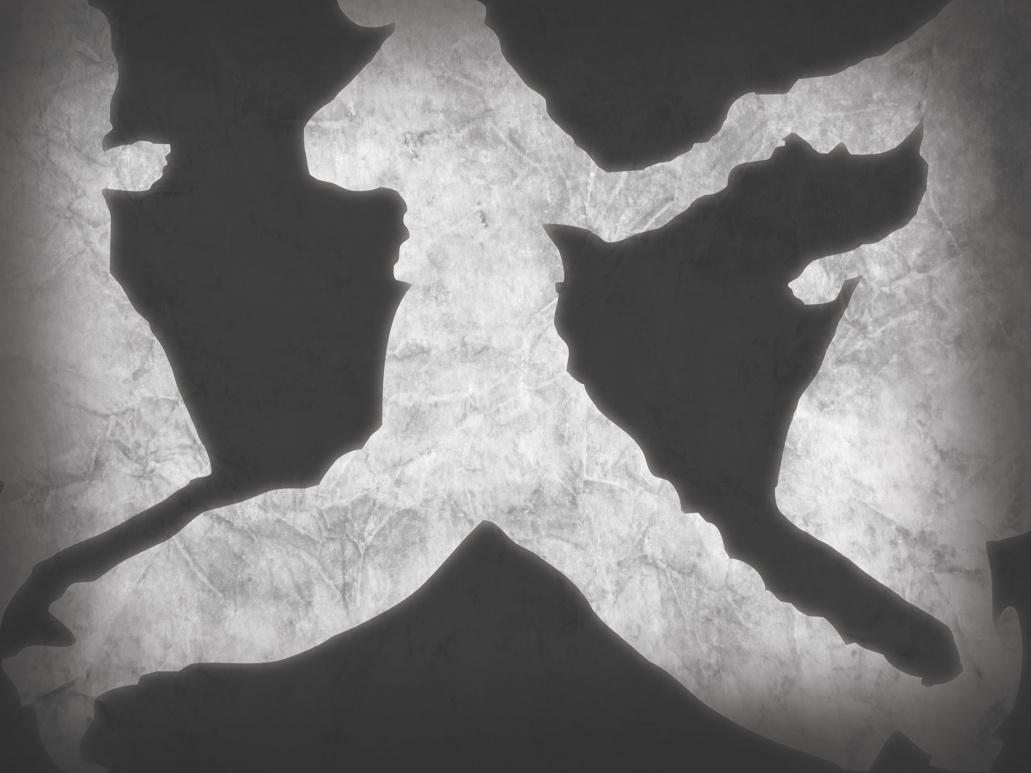 As additional opportunity, the seniors made the choice of black artists from the period of Blues, to create a ‘billboard’ and precis of the artists, and how their creativity inspired the student. 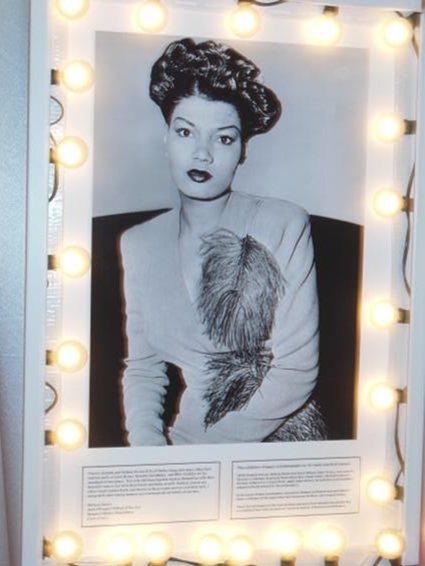 These billboards were curated into an “entrance gallery” of portraiture, which guests would enter through, into the performance space. 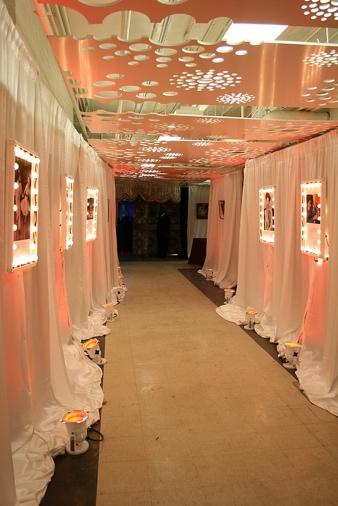 **The particular video performance, linked here, was produced through collaboration with the Kennedy Center, DC School and Community Initiatives Education Division, Washington National Opera, Stanford in Washington, the office of Education and Public Programs at the National Archive, and the Duke Ellington School for Arts. **

Due to venue time parameters of 60 minutes on The Kennedy Center, Millennium Stage, this performance was given in presentation as an expanded Act II, running 55 minutes, and features performances by the artists reprising their original roles: Greg Watkins – as Billy Strayhorn; Scott Patterson – As Duke Ellington; Laree Simon – as Ethel Waters; Bina Malhotra – as Lena Horne; Nia Webb (Duke Ellington School for Art student) -as Reporter.

The performances of Blues For A Royal Flush are in memory of Billie Allen-Henderson, Fierce artist.. mentor.. patron soul to Blues - And like that!

***This script and stage directions are specific to premiere performance of January 25, 2014 – at the Duke Ellington School for Arts (DESA)***

STAGING NOTE / Act I moves as something akin to an ‘eclectic’ dream, as disparate conversations arc, collide across the space, and coalesce as a sort of mesh; this melding cements itself, with all of the characters together in the Cotton Club, by the end of the Act – which seams together, especially for ELLA and BILLY, as ‘past memory’..

BILLY enters carrying a music manuscript; a ‘knowing’ Master-Of-Ceremonies, he is scribbling in the manuscript, as he moves to the baby grand, on the music platform.

He plays a thoughtful repeat of the “intro”..

BILLY: ..the chords tie a simultaneous connection to disparate emotions, you see. The progression is not always tangible; the resolution is everything. ..-even ‘unanswered’, the resolution is everything. -Sounds clear in my head. -..Things always appear to be clear, when you’re able to look backwards to see how you came. But other than crabs, who really moves forward like that? We of us human beings, move with downcast eyes locked on the endeavor of living; though forward is shrouded by ‘unknowables’, we dance on- tapping our way on stepping stones. Some -hold you up off the dirt to pass on ..some -put your feet right in it –you learn to watch out for those, even if you can’t avoid them. ..While some, are not stones at all, but souls, very special souls who do more than mark a thing for us.. they support and maintain; they shine a way to look up, to somewhere else ahead..

(BILLY begins playing “Ride Up In The Chariot”.)

(CAST MEMBERS enter singing “Ride Up In The Chariot”.

They acknowledge BILLY, as they move past, to their places.

BAND MEMBERS, DAISY, LILLIAN, and ETHEL place themselves either side of ‘main aisle’/moat area.

ELLA FITZGERALD stays near BILLY at the baby grand.

YOUNG ELLA has no seat, but straightway wanders amongst the dining tables.

DUKE enters last and makes his way to the upright piano, in ‘moat area’.

BAND MEMBERS are dressed in 30’s, black Tuxes, and enter with the instruments not have not been pre-set; DRUMMER enters with his sticks.)

DUKE riffs on the upright, using the last chords of “Ride Up In The Chariot”, playing with a flourish!)

(DUKE continues ‘noodling’ at the piano. BILLY sketches out music in his manuscript. Removing her smock, DAISY moves to ‘performing space, right’. She is dressed in 1900’s middle class attire. BILLY and DUKE ‘noodle’ at the same melody; DUKE stops.

But BILLY continues- as ELLA FITZGERALD runs a scat scale along it. They are ‘grounded’ in the recording session of 1957.)

BILLY: No. Just, clear. At least, that’s how I keep things in my thinking. If I start clear ..- - but I remember that nothing is. (‘noodling’ at a melody)

BILLY: Not when it’s for him. You’re not meant to.

ELLA: I understand. But you know how to make a piano warm for a throat. I’ve never known music to bow so for a human being. -..I’m just grateful you have a true and gentle nature.

ELLA: Oh no. That’s not my style. I just know how important it is to speak what I see ..folks don’t always tell you the good things you should be allowed to hear. Just tell you the things they expect you should-

BILLY: Dine on. Smile. And keep their bank accounts fat with. True. All too true..

[BILLY plays noodles around bits of “Something To Live For”.]

ELLA: He’s bringing charts. They said he was bringing what we’d be..

BILLY: No note in the world you don’t already know.

ELLA: I’m only wondering. Just want to be able to keep up…

ELLA: Nothing. Little chill I think.

BILLY: Think of something to keep those chills away.

ELLA: ..well I would if I could. What do you think of?

ELLA: -..no. -No. -Dancing wouldn’t do that for me. [she hums a bit of “Ride Up In The Chariot”.] Music does. Singing it out does. But. Sometimes.. -..You ever have one of those days when you’re feeling like something isn’t right ..like, everything you touch is going to crack a note..!

BILLY: I let these (wiggling his fingers), keep me away from thinking past a melody.. [‘noodles’ a melody at the piano]

DUKE: Dance right down into sounds.

BILLY: ..don’t worry; you can make anything make sense.

ELLA: ..yes well.. it’s a gift of ‘true pitch’. That’s what makes the oblong, square- the cock-eyed, straight. Since I was a child, I even hear the suggestion of a note, and I can move that thing into a pitch, off a slant, I wouldn’t wish on a roof!

BILLY: While others are merely mortal, Miss Ella, and make do.