The Me I Want To Sing 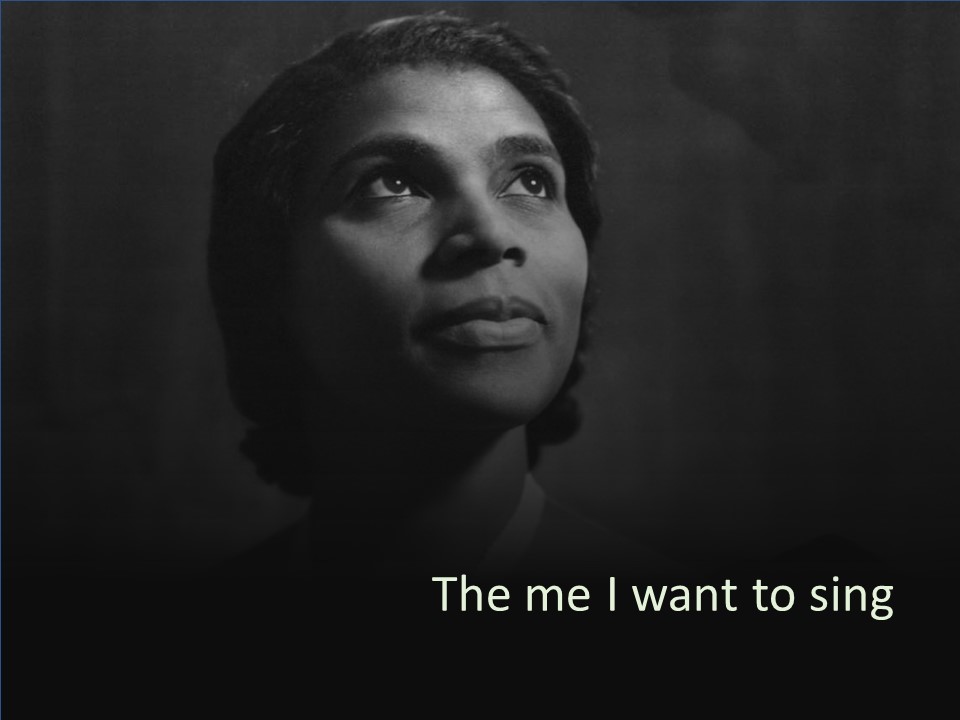 This 55 minute multi-media work, is also a performance piece for SOPRANO, ALTO and ACCOMPANIST that celebrates the lives, friendship, and artistic legacy of two women of color, Marian Anderson and Leontyne Price.

Originally commissioned in 2017 to celebrate the achievements of two Kennedy Honor Recipients, Marian Anderson and Leontyne Price, this work was reprised in 2019 to celebrate the 80th anniversary of Ms. Anderson’s recital on the steps of the Lincoln Memorial, on the 19th April 1939.

This work has been performed at Westminster, DC, and at the National Portrait Gallery-Smithsonian Institution, as part of the 2019 season of The March On Washington Film Festival (MOWFF).

The 2017 performance premiered on the Millennium Stage, Kennedy Center, with the talents of Laree Simon, Leah Hawkins, and Dana Kristina-Joi Morgan, accompanist.

The 2018 Westminster, DC, performance was presented with the talents of Laree Simon, Leah Hawkins, and Roderick Demmings, Jr., accompanist.

The 2019 Family Theater performance was with the talents of Laree Simon, Christine Boles, and Rodderick Demmings, Jr., accompanist

Education component / Above and beyond being a work able to present music students in performance, creating the ‘visual track’ of images offers opportunity as component part of production work; with the script as 'blueprint', students engage in identifying images, photos and assorted associated material to utilize in production, as well as in the classroom, in learning the background to the music selections, time period, journey, segregation, and challenges of these two artists; work is threaded to engage the appetites of Theatre, Visual Image, Museum Studies, Playwriting Track, Music, and Opera Track, from high school, up through university.

The ’visual track’ to this theatre piece was created through a Kennedy Center Education Residency, in which I was able to work with a class of juniors, at Duke Ellington School for Arts.

They learned of challenges that African Americans faced throughout a time of segregation, as well as specific discrimination Ms. Anderson and Ms. Price faced in their personal journey, as artists of color.

Students also learned how to be better discerning creatives in their use of image found on the internet, in considering copyright, checking provenance, and identifying authenticity (that the image really is what it purports to be).

In addition students were taken on a class visit to the National Archive, in Washington, DC, to learn about the largest collection of the nation’s important documentation & the proper storage of its visual image content.

As culminating work, students created the ‘visual track’ that accompanies the performance, which allows for a deeper resonance of emotion, through specific choices of image, in alliance with music, as well as sung and spoken text.

Students were also chosen to run the visual image projection sequences in the 2017 Millennium Stage performance, as well as the 2019 MOWFF performance, at The National Portrait Gallery.

SOPRANO: …it is no mystery –

SOPRANO: -out of civil war, and Emancipation - the sight of citizens of color, moving in culture - such a sight, inflamed a civil ire left smoldering beneath Reconstruction’s scaffolds.. No policy of politic could salve sight of pure black, in daylight.. ..establishing – infrastructure of society; success.. pleasure. ..but there emerged things to be done to check this - to impede this ..to harass ..to remind .. -that free, had little to do with freedoms..

ALTO: ..in this new condition of existing, strength could always be found- in praise and conviction in the congregation of black churches. Spirituals nurtured community, and sustained an atmosphere with inspiration - imbued by free children..

SOPRANO: In 1915, at the Union Baptist Church in Philadelphia, the young Marian Anderson’s voice rang out in dimensions of a gift of song so pronounced, that it was no surprise every coin which could be rendered, was taken into collection - to make sure the girl would have a teacher, and a start, fit to guide her in music, beyond that body’s knowledge. Their act of support was a bond, and the spirituals, sung at the threshold of her journey, grounded them all in the shared experience of knowing that she would never be alone.

*ALTO/ACCOMPANIST: My soul’s been anchored in the Lord.. (Florence Price)  3:30

SOPRANO: Marian rose on the embrace of her congregation, but outside of church, in the face of segregation- moving towards making a choice to be a classical singer, defined engaging a path of a brand new journey in education.

ALTO:  ”I was very accomplished, ahead of applying for further education. I walked up the front stairs, of the music school in Philadelphia, in through the door, and stood in my turn in a line full of people. There was a young, blond girl behind the window ..she looked over my head, and took all those waiting behind me ..until I was the only one left.. ‘What do you want?’ she said ..I told her an application blank. She raised her upper lip ..as if she smelled something bad, and said to me – ‘We don’t take colored’. –I wonder I didn’t throw up, right there. But I didn’t. And thinking on it,.. –‘can’t I sing, can’t I be a singer, because –what? I’m-..?”

ALTO/SOPRANO: And her mother, as mine to me.. reassured her. “I can do anything I want.”

ALTO: I felt I would then.