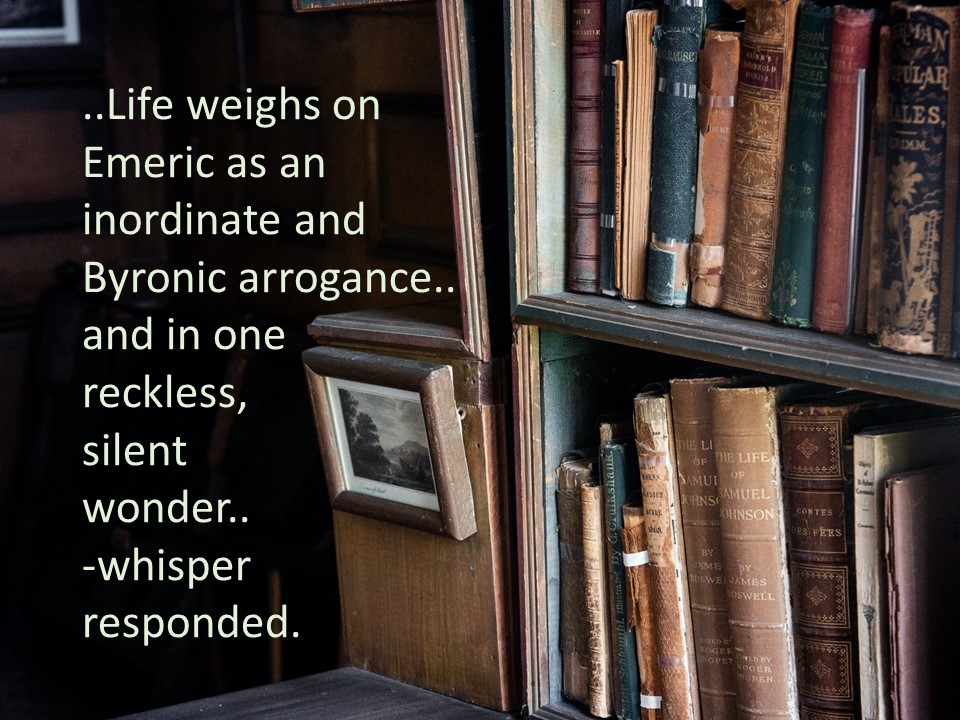 Life weighs on Emeric as an inordinate and Byronic arrogance.

everything is vainglorious; achievement is folly. Preferable to study

;dismisses it, as: conspicuous.

Written in my early reach as ‘fiction’, this belongs to the short stories created for the collection Doors To My House..

Its carcass is of a white grey; its death like character, heightened by the dry seeping lichen, shrouding the facade. Rogue square stones scale one another; race round to a height -capped, with a rotting wooden tonsure. Squared slits let light seep in at the juncture; windows, lower -struck into the body of the building as an afterthought- allow chaotic bright to worry lint and dust to dance between tiered iron landings, protruding into the maw of the giant hollow; while on the ground floor, decrepit bookcases construe a maze from which the uninitiated rarely emerge victorious. Books everywhere -ancient copies of copied literature, replete with ravaged bindings -are dismissed to broken shelves; floors; table tops; corners -left as door jambs; step ladders.

This prehistoric original [another has been built more central- with every “mod-con”] is a hulking folly; a haunt, where students repair to be indiscreet -unobserved.

The sun has already fallen off the horizon as Emeric enters; a sigh, squeezed from him by the clogged air, rises -wheezing, higher and higher.

Profoundly weary -he searches the thickening grey for a precipice

-finally choosing a chair, lofty, at a monarch’s vantage.

Age spews from the rotting throne; the acrid scent is the final evidence of a moribund reality. It causes Emeric to break the arms of the seat; gripping them tight  -screaming directly into the empty: “It’s all so fucking  boring.”

The words pummel the silence disintegrating into echoes-

-and a volume of Goethe falls;

flips off the table two flights above; drops

landing hard on his hand. “Ow-”

Emeric looks up -leans out and up, into the body of the drop. “Who’s there?”

A word drifts down- “sorry” -which caresses his ear.

A touch on his shoulder.

Emeric snatches his eyes from above; startled sideways out of his chair and banging

“Frightened you twice, did I?” Violet eyes amuse themselves with the boy’s discomfort.