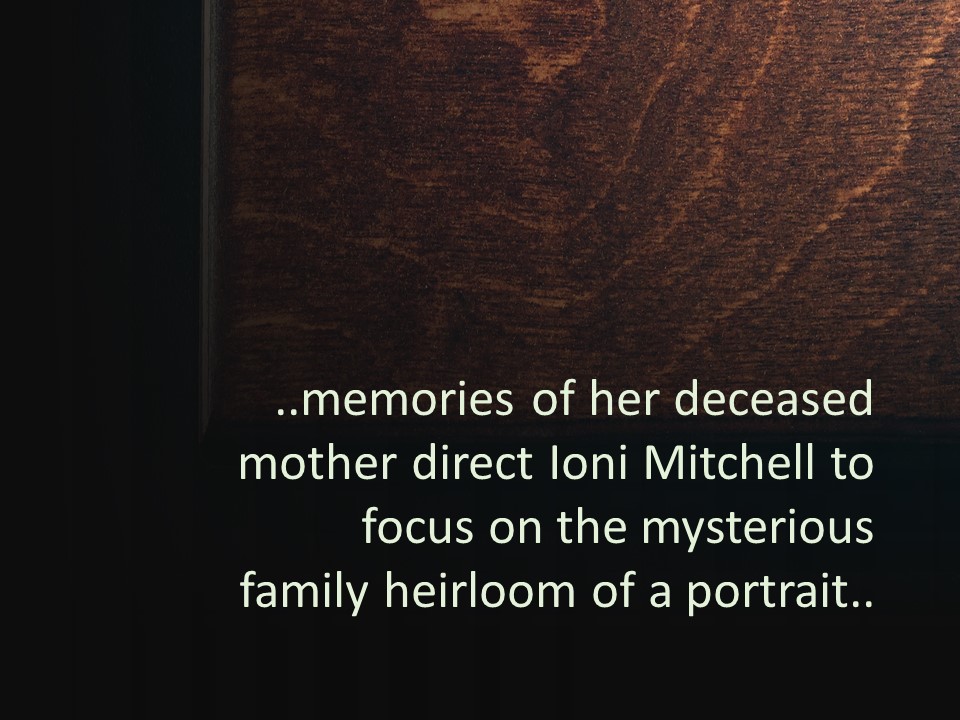 In the wake of her mother's death, an African-American television exec, Ioni Mitchell, navigates feelings of isolation and loss of family – until memories of her deceased mother direct Ioni to focus on the mysterious family heirloom of a portrait..

In identifying the artist of the painting, Ioni discovers choices made in an America of the 1870's, whose consequences and deeper secrets haunt an unexpected ancestor, in contemporary France..

The play, moving in time between the present and 1875 - America and France - bears Witness to a startling family history of caste and color .. which reveals crucial hard truths attached to the reality of Freedom.. and freedom of choice..

The play had one of the longest gestations; from 1994, to 2003. It finally emerged as a work that aims to present the dynamic complications of what “free” actually looked like; ‘lives’ like, and expects of African Americans.

It is my hope this work continues to find fertile engagement and scaffolding towards deeper opportunities of scrutiny, presentation, and audience.

All dialogue in bold parentheses ‘()’, is to be translated into French.

MARIAH steps out of the dark; barefoot, she is in a 60’s, two- piece suit, and wearing a ‘pill box’ hat.

MARIAH: -..Ioni. Please! I needed this hat? Honey. Where, are my shoes?

IONI: -I gave them away.

MARIAH: -And the dresses?

MARIAH: And the handbags?

MARIAH: Did you get any back?

IONI: You didn’t care what I had to walk through..- -You did wrong mother.

MARIAH: She didn’t say that.

IONI: I, Me ..went to where Miss Mariah was -..into that, tiny brick building. -Mother it was a cold, stingy, fluorescent.. cubicle. No privacy. You couldn’t help but overhear every other person in the place waiting for their last breath..- -I barely got to know her before she died. My great aunt, my great aunt, for barely a week.

IONI: We’re not talking about him.

MARIAH: Was killed in the line-

IONI: Of duty. Not denial.

MARIAH: As a policeman, a possible thing.. -But I went on with you. Fed you. Clothed you. Warmed you. Held you. Took pride, in you. -..and here you are, being dismal about me.

IONI: ..all the time it seems.

MARIAH: ..where are my

IONI: ..-isn’t there anything else you can do?

MARIAH: ‘Anything else’, or- ‘somewhere else’?

IONI: -Can you really see me?

IONI: ..Well I don’t know who this is, mother. I don’t know this person, who is crackin’ up right in my skin.. And down to wearing the same clothes..

MARIAH: ..but you know better than that, baby..

[IONI.. undresses down to a slip -then reaches into the clothes rack- and removes a worn, terry cloth, housecoat; she puts it on.]

MARIAH: Wall’s not at the flat of your back, honey. You just gotta ..well, face into the room.. That’s all.

[..IONI snuggles the fabric of the housecoat, and then is still a moment.]

IONI: ..-when I found Miss Mariah- ..suddenly, even angry at you ..I didn’t feel- ..alone. Suddenly, some ..unconnected piece of me, sang for joy.. -some piece of me I’d not known was even aware of being the ‘last’ …-But now that sound of joy in me ..that voice.. is the reminder- there is no more time to know beyond me.

MARIAH: Which was mine, when your grandmother died. And I only “occasionally” let you wear.

IONI slowly moves into a small bedroom in her home.

There is a tiny single bed; a frumpy cushioned armchair. The portrait of “The Artist’s Father”, dulled with grime, smoke and age, hangs over the bed.

IONI: Oh- that your new word for “small”.

IONI: -..You were beautiful mama.

MARIAH: A big, round, water.

MARIAH: And her porch. -And her granddaughter. -..who was to us all, a-

MARIAH: -..painting. Which came to me. With the housecoat.. -..both of which, you kept from Goodwill.

MARIAH: You never asked. I said.

MARIAH: -It was too old to be something curious to you. But..

[MARIAH walks slowly into darkness; IONI moves to examine the painting, and takes it down.]

CHARLES, in an artist’s smock, enters carrying a stepladder that he places in front of a vacant wall space.

Continuing an argument - PROFESSOR enters quickly on the heels of CHARLES!

CHARLES: I meant no impertinence, Professor. I meant only to point out, sir, that what you have me do

PROFESSOR: I have you example your skill.

CHARLES: -A portrait of driftwood.

PROFESSOR: Clambering with Nature. In an autumnal northeast sunset.

CHARLES: I can do better.

CHARLES: You know I can.

PROFESSOR: But that is not the particular requirement of this particular skill.

PROFESSOR: So, when you are proficient

CHARLES: In what ‘you know’?

CHARLES: I do not aspire to be a house.

PROFESSOR: That. ..is quite clear.

PROFESSOR: I do. I have, Charles.

CHARLES: That is not what I feel.

PROFESSOR: But it is what you know. You know I have. -..you are by far and most certainly, gifted.

CHARLES: ...-is this what frightens you?

PROFESSOR: -..unchained. -..direct from some field. Or stable. -Look at him. ..the product of a damaging policy of, Impetuousness.

CHARLES: Why do you say that?

PROFESSOR: Do you know why?

PROFESSOR: No. That will be all.

CHARLES: ..that is hardly fair, sir.

CHARLES: They have no past exposure to this kind of experience.

PROFESSOR: I say God has made them. It is no fault their brains are without elevated capacities or sensitivities.. ..no. It is, as they are. But to place them, in opportunities of such employment.. is wasteful.

CHARLES: Sir, it is some progress.

PROFESSOR: It is no less a vulgarity for that- ..and the rotting agent, meant to decompose the afterbirth of civil war. -..who can cherish such an age? Too many.

[PROFESSOR has hung the portrait and removes the drapery; we see it is Thomas Eakins’ portrait of The Negress.

PROFESSOR is unsettled by it, unaware that CHARLES is mesmerized by the work.]

PROFESSOR: ..the very air breathes license, and now communicates the most unacceptable techniques, turning our tools into the implements of anarchy ..and licentiousness. ..-leaving nothing but ignoble pursuits for the young!

GILBERT’S restoration shop. IONI is holding the painting close to her.

IONI: -..I’ve had to be reminded that my father- used to speak freely with people he didn’t know. -I’m not as easy a person as my father, or mother.. but I’m trying to be.

GILBERT: -..trust is such a complicated thing, isn’t it? Leaving beginnings such strange events..

GILBERT: -I would like some time with Mister Jericho, to know him better.. Would you allow that?