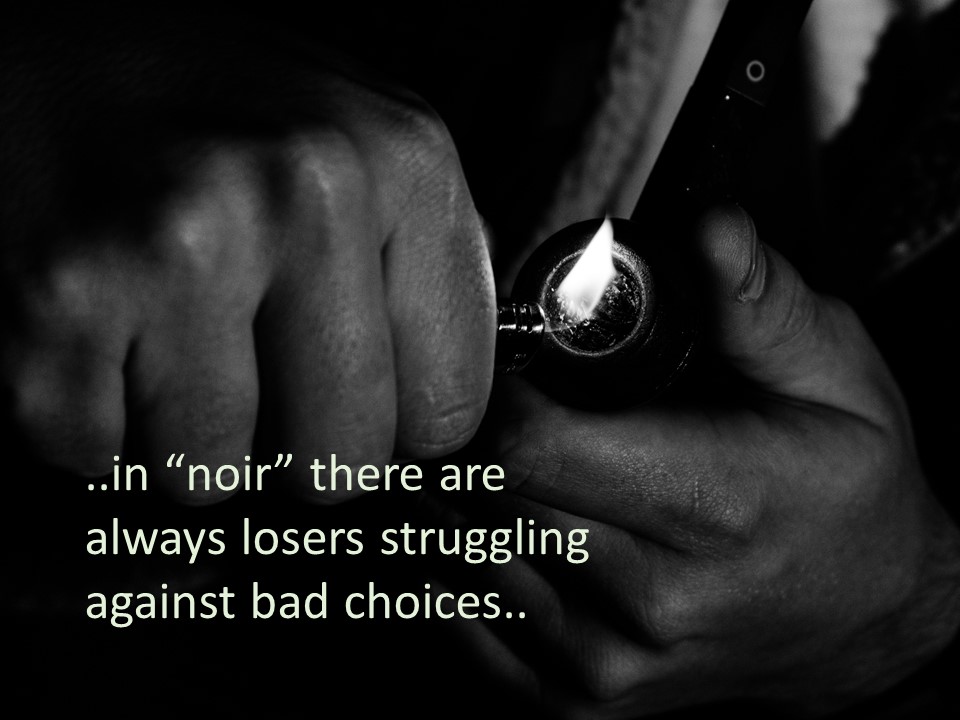 ..in “noir” there are always losers struggling against bad choices.. -but what if
some were destined to test the balance of “good” and – an alternative? Chiaroscuro takes
place in a 1940’s metropolis of slang, seediness, murder, and every twist of badtime souls
can know.. all the while unknowingly playing out an immemorial wrestle with deliberate
evil..
This is a play in Two Acts.

Chiaroscuro was written in 1996, and is dedicated to Areta Breeze, who first took it into workshop.. It is a work that is my own take on ‘film noir for the stage’, and should be envisioned through all manner of angles, shadows, archetypes, and creativity..

LOREN / of an indeterminate age

*The action takes place in a 40’s Metropolis *

Night.  The thunder is closer. There is also the soft spattering sound of rain.

An office. A giant gilded mirror hangs off a wall, in front of which is a chandelier, dangling a heavy rope, with a noose on the end of it.

Beneath the chandelier is a chair that has been kicked onto its side, but still has a suit jacket on the back of it.

There is a glass of scotch, and an ashtray with a half smoked cigar in it, on the floor.

REESE is standing inspecting the scene.

LOREN: Hell of a way to go. Heavy as the victim was, it must have been painful.. tight, trying to belch in that last gasp of ..air ..but ..unable.

REESE: I don’t have imagination. I do have a job. So.. How about a hand?

[LOREN applauds. Then stops, and goes over to help. He cups his hands to hoist REESE into reach of the rope, but the knot is awkward.]

LOREN: ..you can manage. Imagine your success. Difficult things are well worth an effort..

WINK: Am I interrupting something? I mean, I’m not wrong understanding that we’re here to be doing our jobs, and not from the floor, right?

LOREN: Dropped him. Sorry about that. I’ll go back to my post. Securing the area. [exits]

WINK: Yeah you do that.

WINK: So who’s the victim?

WINK: It's four in the mornin'.

WINK: So how many bank Presidents you know work the night shift?

WINK: Passin’ by the body, I noticed he wasn't dressed for nothing special -costume party -dinner with the Mayor. You know -fancy.

WINK: How long you been doin' investigations?

WINK: Two years. You got plans for when you grow up?

REESE: Yes sir, as a matter of fact-

WINK: Imagine that. One of them ivy coated places huh?

WINK: Matter a’ fact, I like solo Reese. It's safer that way. So don't crowd me. Number two- you don't open your eyes soon, you better change your thoughts of the future. More like night desk. In the deepest office, in the darkest corner. Lickin' postage stamps. You got me?

WINK: Sure. -So. -We gotta reason this Morgan guy was here?

REESE: Not yet sir.

GABRIEL flashes his wallet and is allowed in. He enters unnoticed by WINK or REESE.

REESE: ..Nothing else strong enough for the job sir?

WINK: Reese, the place is empty.

WINK: It's night. Or mornin' for some of us.

WINK: So? Why the chord?

WINK: Sure. Why the duty of fixin' a knot? And where's the note? You find one anywhere?

WINK: Apparent suicide. Suicides leave a note. You find one?

GABRIEL: Sure! The murderer.

WINK: What are you doin’ here?

GABRIEL: Givin’ ya a hand.

WINK: Yeah? I'll pay for it when I need one. Who let this cockroach in here?

REESE: He has ID sir.

GABRIEL: But officer, I'm the law.

WINK: Wallet. [waits for wallet; taking a plastic shield out of it] Woolworth's finest, huh?

WINK: You're off the force Gabe. Remember? Canned! No more privileges. No more waltzin' into crime scenes. No more “I'm the law.” You got that? You're through. Busted. History. Beat it!

GABRIEL: Don’t worry. We love each other like brothers. [crosses his fingers] We're like this. Ain't we Wink?

GABRIEL: Jesus. I jus' can't believe my partner would talk ta me-

GABRIEL: Get offa me!

GABRIEL: Glass a scotch! Half a stoggi. No note. So calm he coulda been talkin’ to himself. Or someone else. -Am I wrong?

GABRIEL: Yeah. But I do. You need a hound. I’ll tell ya what. I get you answers -we talk -I scram. Don't want nothing more. Honest.

WINK: You don't know how to spell it.

GABRIEL: Then for old times, huh?

GABRIEL: An afta- I go quiet. Won't see me no more. Promise.

GABRIEL: Ok. You don’t gotta talk to me. I was jus’ tryin’ to save you a ride.

MOURETTE: Wouldn’t that be embarrassing for you? You're not allowed in anymore. -I've been eavesdropping.

GABRIEL: My. What big ears you got.

GABRIEL: Drop the act sister. Who you workin’ for? What's the deal?

MOURETTE: I don't understand why you want to be back on the force.

GABRIEL: That ain’t a question.

MOURETTE: They ruined your life. Left you abandoned.

GABRIEL: It ain't non’a ya business.

MOURETTE: Oh. Bitterness. Not just the force. Someone ..-special. -She was a cold hearted bitch to-

GABRIEL: What am I doin’ here- wastin’ my time with a two bit hooka who thinks she knows somethin' she don't.

MOURETTE: Don’t I? [grabbing him] They've all taken from you. Wasted you. Not bothered to appreciate-

GABRIEL: Get offa me!

MOURETTE: Forcing you to nose around [holding his wallet open] -naked.

GABRIEL: How'd you- Gimme that.

MOURETTE: You're just an apparition going through the motions.

GABRIEL: ..get away from me.

MOURETTE: Look at yourself. You don't belong anymore. Except here. Who would think twice passing someone like you, looking like some common bum.

MOURETTE: Who else would be honest now? Whoever she was -she's gone.

MOURETTE: Of course. But..Gabriel, why waste time on little wounds?

MOURETTE: I know I can offer you so much more than disappointment.

GABRIEL: Sure ya do.

MOURETTE: And you like me. -Gabriel Trent. I'm in a position to bring you pleasures few have dreamed.

GABRIEL: And whadda I gotta do for this honor?