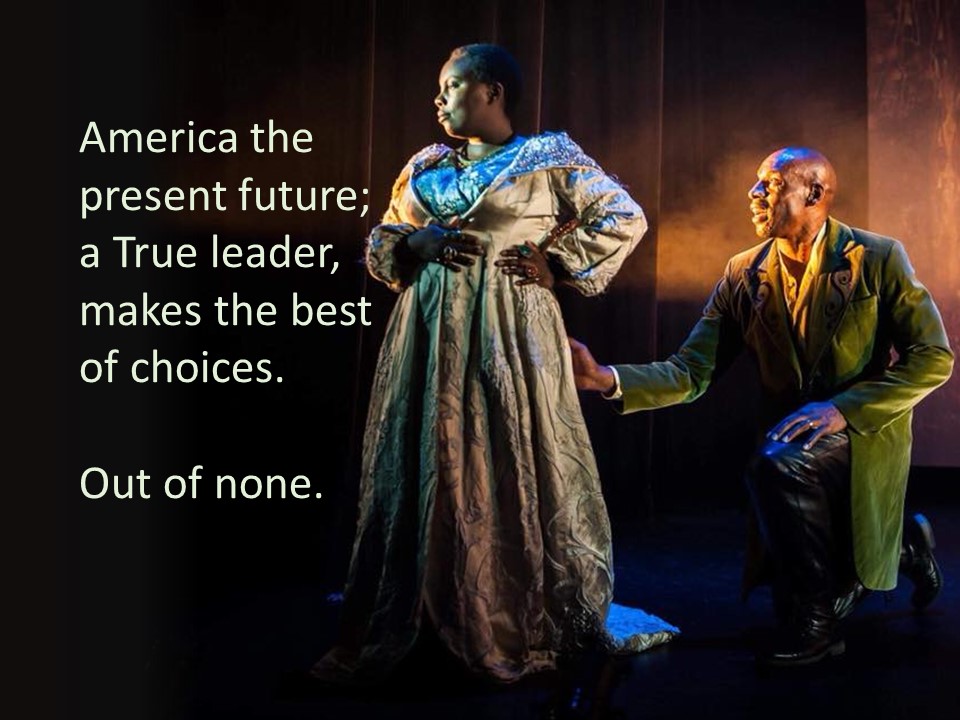 ..in an extremis of climate change the world is in a great migration of populations…

Girded round its entirety by a Great Border Barrier, America is sectioned into 5 Zones, each run by a General Commandant; from these ‘Zed Fortresses’, they owe allegiance to the Senate, situation in the Domus, and presided over by the SPEAKER.

Inside Zone Zed 5, GENERAL FISK is leader; but his allegiance is daily more unsteady.. he has allowed “refuse”, nomads of migration, into his Zone, to the point that even his own soldiers are beginning to question FISK’S wisdom.. especially as he now keeps close company with a young nomad mystic.. named YVES, who urges the General to be ‘leader’, as only a “Great Leader can make the best choice, out of none.”

LOUISE, FISK’S wife, harbors deep resentment at being so far from the Senate Domus, where her power mesmerized all who set eyes on her.. she is suspicious of her husband, and the relationship with YVES.

FISK is called to the Domus, and LOUISE is left with YVES, who she seeks to subjugate.. But the young man is not in awe, and instead, dances for her. It is a dance of life, passionate and wild, overwhelming LOUISE’s senses!

In the Domus, in the very center of power, FISK is reunited with the other 4 General Commandants, who goad and tease him at the open gossip of FISK’S entertaining the very refuse he’s meant to eradicate..

But it is FISK who interrogates the Generals as to the real chance of stability in their Zones; can they be held..? Can they sustain crop yields, water..? And, if not- then what? In the heat of questioning, GENERAL 3 -weakest willed of them all- is forced to confess that the last time he was brought to the Domus, the Senate asked if he would return. With his army! An act against written law, such a maneuver would be to ruin the current balance of power..

FISK intends to confront the Senate SPEAKER with this – but is instead offered central power by the SPEAKER.. “if”, he is willing to return to the Domus-.. -a stark condition that leaves FISK horrified and challenged to his core of discipline..

The balance of power is now openly in threat; the Zone Commandants join, against FISK -who is declared rebel.

AUTHOR’S NOTE: This iteration of America Rex premiered in Auckland, NZ, in 2018, with the production landscape as a specific Māori lens..

Link to article in Multicultural Times / Jounalism for Diversity

In the broader concept of this play, I envision this as a work able to speak through any lens of Indigenous culture, albeit in some manner of ‘Dream Time’, and in any cultural aspect of language, dance, imagery, ‘ceremony’, and Otherness..

I have also had the benefit of working with Grammy Nominated composer, Joe Mardin, who envisioned a unique ‘music landscape’ to the play, to span all manner of composition styles, use of instruments, and voices. He also created sample compositions to accompany specific scenes of the Showcase production, and has worked with me in fashioning a blueprint, music cue sheet, that laid out sequence possibilities for everything from “fanfares” to background effects.

[FISK moves out of the light, as LOUISE enters, believing herself unseen..

She goes and picks up the glass of scotch, and smells deeply from it -attempts to take a taste -can’t; puts the glass down, and begins to leave. She doesn’t; goes back. Picking up the glass again, she breathes deeply.

A noise makes her turn; she sees FISK.  She quickly drinks; waits expectantly for a poisin to work, but nothing occurs; she is clearly disappointed.]

LOUISE: ..-nothing is ever what you want here.

FISK: Scotch.. is a thing more than rare, Louise.

LOUISE: Better it were-

FISK: What you need.

LOUISE: Air is what I need! Something to breathe.

FISK: The seals are working.

LOUISE: The seals deteriorate within days of being installed..

FISK: -..and after that? Once air is secured -what would please you then?

LOUISE: ..you think to have a good night?

FISK: ..-as when we first arrived.

LOUISE: -even then, with little hope. And even now- with less than that.

FISK: Yes. But knowing this.. we found we had to make laughter –use it, like a broom, beating silence out of rooms -the furniture -the guards -the corners, where it helped to laugh!

FISK: ..It helped then, in remembering other nights elsewhere- ..

FISK: In the Domus.

FISK: -in the minutia of strategems..

LOUISE: -only we could see.

FISK: The two of us.

LOUISE: With all eyes witnessing!

FISK: And not a single pair in plain sight seeing..

LOUISE: ..if life was never better, why did you make us leave..?

FISK: -I tired of a game of snatching moments.. leaving celebrations so it could be we, two, alone.

LOUISE: -where no one is ever alone-…

FISK: - ..listening, through all the lush sounds.. of the fountains..  - in ambition of-

LOUISE: (a stifiled cry of anguish) Games with refuse, torture with me!

LOUISE: Louise. Louise is vacant! Let the remains be.

FISK: -I will give instructions. About the seals. -Before I go.

[she hesitates, not quite certain of what she’s heard.]

[-she suddenly connects things with the decanter of scotch.]

LOUISE: For the audit?

LOUISE: -the option comes every year.. –but [FISK remains silent.] But this time you’ll go.

LOUISE: -to dazzle and obscure, as we ply out strategy- -there, again.

FISK: It is not possible.

SPEAKER: No participation in the race -..there is no opportunity to win any prizes. Gain, any greater recognition of state.. It will be disappointing for your Residents.

FISK: They are unconcerned.

SPEAKER: Unconcerned. And you -have no Adjutant, still.

[Raucous splashing shouts from within the hall.  FISK is alert..]

SPEAKER: -..the noise is missed. Old Men here -as you once said, Fisk. But could you imagine otherwise? Such -maintaining progeny here? Horrible! The fracturing. The secrets. The jealousies. The disruption! The petty- power gambits. Fear- of youthful eyes, viewing the Senate’s portals -gauging its strength, from here.. Calculating just how many siblings it might take to-.. -No. Far too dangerous. -..yet-.. -life is dedicated to survival. ..Seeding something, to safeguard continuation -..maintain duty -exemplify obedience! Reflect greatness.. For this, it is right we breed in the field -..so to speak -..and Sew Trust thereby, to husband Our longevity. A trust- which recognises the purpose of Our ..Zed Generals. Who trust in Our, even foresight. A trust, ultimately, which honours Us- defacto genitors -with loyalty! Ensuring that All Our Citizens see only continued stability.

SPEAKER: -Very important, to please the crowd. -..and luckily, stability is one of the greatest soporifics in history.

[LOUISE motions for group of REFUGEES to come closer; they do not]

[they do not move.

LOUISE attempts a rhythm, clapping her hands. It makes no impression. She stops.

Unnoticed, YVES stands in the doorway.]

YVES: Your General. In his fortress.

LOUISE: Here is not his fortress.

YVES: Do -not command.

[YVES smiles, then begins clapping his hands in an applauding parody of her rhythm.]

[YVES turns towards the REFUGEES; the rhythm of his applauding, is music. He nods to them, to begin.

They dance; it is an inarticulate mass of flinging and flailing.

Frightened at first, LOUISE soon loses herself in the sheer unimpeded expression of their dance; the clapping alters -fades -stops. The dance ends.

YVES motions for the REFUGEES to leave; they exit.]

LOUISE: Our dance, is not for show.

YVES: It does not talk?

LOUISE: It is eloquent. It talks power. Restraint. Grandeur.

YVES: Show me this.

YVES: Show me –a, taste, of this language. -Please.

[LOUISE dances. It is a synthesis of the medieval, the ‘distant’, the ‘retentive’ and courtly. She stops abruptly.]

LOUISE: -It is a complexity. -An ancient step dance, symbolic of our-

LOUISE: -We have other dances. -More difficult.

LOUISE: Less movement. Proportionate to the eminence of the audience, the occasion.

YVES: Until -..there is -no movement. Your most -important occasion.

LOUISE: Our most important dance, is not for an audience. Or occiasion. It is.. -“Strategem”.

LOUISE: Strategem. (she closes her eyes to concentrate)

SCENIC VISUAL IMAGE: Domus Collanades stretches into infinity..  Eyes closed, LOUISE, suddenly entranced, dances a series of movements that are both “detailed”, tightly wrought, and infinitely complex, and which occur without taking up any ‘space’.]

[YVES lowers his palm, and the Domus Collanades vanish.]

LOUISE: (opening her eyes) Strategem. -You would not understand. -It takes a lifetime of dedication. Not only to make the movements, or to devise them. But to find- -to- -To share them..

YVES: -between only one, and another.

YVES: Moved you. -As. Every night. -..when the fires die. The dark. You show your face.

[YVES regards her a moment, then makes towards the exit]

LOUISE: What is it they dance? -I want to know. -Tell me. -Or I will ban their dance.

YVES: I will, bring them. Here. When you are -by yourself-

LOUISE: No one, is by themselves. Anywhere here. -Remember that.

YVES: -I am without fear.

LOUISE: So I see.

YVES: Who you also, do not like. -He does not -impress you.

LOUISE: Then why should you?

LOUISE: -you’re- fearless? -Because you’re, younger? -Because you move about without restriction? -So can I. -Listen at doorways? And bedrooms? Down halls? -So can I. -Play games? -You have no idea. -So? So what to all of it?

[YVES takes off his shirt and shoes. He walks to her, and takes her hands -claps them together. Forces a rhythm. He then dances for her - moving menacingly -forcing her backwards, into a chair; then, in a warrior’s passion of tenderness - ending finally, virtually on top of her.]