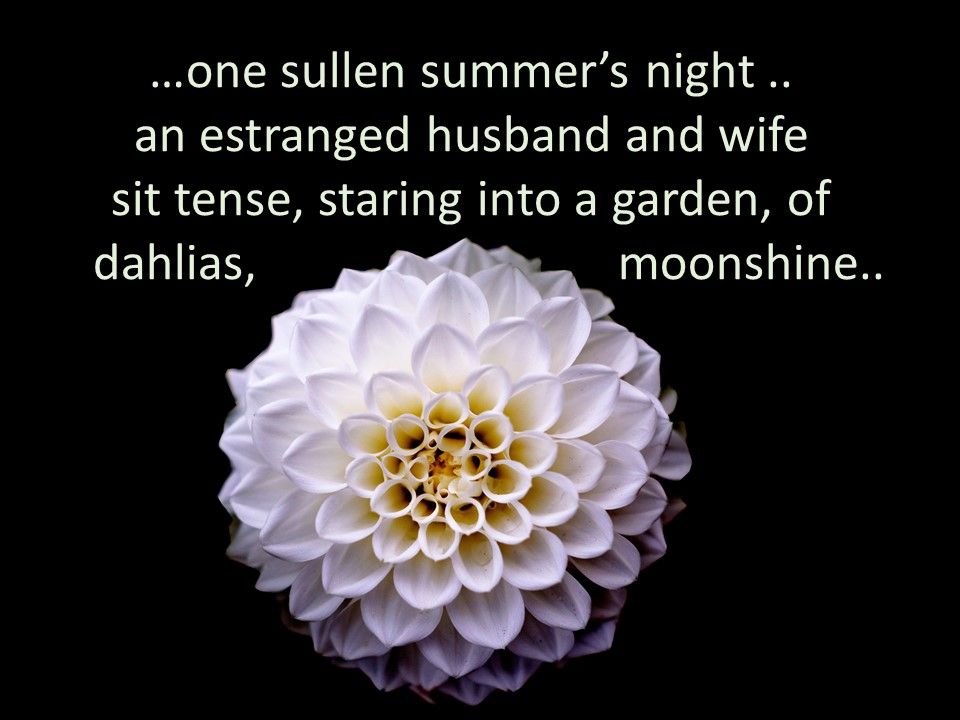 SYNOPSIS: …one sullen summer’s night .. an estranged husband and wife sit tense, staring into a garden, of dahlias, moonshine..  ..whispering fears strike one another as lightning, jolting years of secrets into view .. for which their son might be paying the price: is it love, or a haunting in plain sight..

This play is in Three Acts.

Although written while I was living in London.. dahlias and moonshine.. was conceived as an homage to Tennessee Williams.. – in a gothic tradition of seduction, and smoldering recompense..

** The action takes place in a small southern township**

Entrance is door, down a few steps right. There is a door to a bathroom left.

The place is a mess.

As the lights come up- WILL is sitting on the edge of a window sill, holding a box of chocolates. MALCOLM is in bed under the covers.

MALCOLM: Will. -What are you doing here?

WILL: Bringing you chocolate.

WILL: Waiting for you to get out of bed.

MALCOLM: -..you followed me.

WILL: For moral support.

MALCOLM: ‘Cause you think I’m a coward.

WILL: You don’t know I think that.

MALCOLM: You think I won’t.

WILL: Think you mean to.

WILL: Just thought..-well, not much help, here in the back of beyond.

MALCOLM: Hell. Still a few hours till you get there.

WILL: If you say so.

MALCOLM: We’ve talked all this out. I know you mean well..but..-right I do this on my own. -Go on back.

WILL: After coming all this way? Could at least offer me some kind of good morning.

MALCOLM: Cut that out! -Go on now.

MALCOLM: Sure, I’m sure.

[he crosses the room to the door]

MALCOLM: Where you going?

[he goes back to the window.]

WILL: Pretty light out this window now though.

[waves out the window]

MALCOLM: What the hell-

[MALCOLM grabs him out of the window]

WILL: You can be the most contradictory boy.

[he goes to the bed]

WILL: You just said wait.

MALCOLM: Don’t get in that bed.

MALCOLM: Put those shoes on. Don’t take those socks-

WILL: I ever tell you you’re just the cutest thing when you sleep?

WILL: Nose all screwed up with snot. Drool sliding out the side of your mouth. Eyelids- fluttering a mile a minute.

WILL: ’Cause you’re dreaming of me, huh?

WILL: -There a dog down there?

MALCOLM: No. You hear something?

WILL: No. Just wondering if you had any pets.

WILL: Boy- growing up a few hours from the back of beyond. No brothers or sisters. Must have had some kind of best friend around?

MALCOLM: Don’t know why we gotta talk about it now..

WILL: ‘Cause I’m here. And it’s your home. Gotta give me some kind of memento for the trip.

[WILL begins to make love to MALCOLM.

There is a noise suddenly; as though at the bottom of a stairway.]

MALCOLM: No. You gotta hide!

WILL: Wouldn’t this save you the trouble?

[WILL and MALCOLM go off left. Running water can be heard.

DOT: Guess you didn’t hear me over the water.

DOT: Oh. Were you meant to be somewhere?

DOT: Then what have you overslept?

MALCOLM: Nothing -I guess.

DOT: Oh. I thought it might have to do with your...-return?

DOT: Seems to me-

DOT: -..and in the middle of the night -looking like a -downed sparrow.

DOT: Yes. I have both letters. -You imagine I hadn’t been worrying? You could drop on in, and we’d just pick up where we left off?

DOT: Like that all the time. Only me and the house.

MALCOLM: Used to threaten you couldn’t wait for that.

DOT: Nights, quiet enough to hear every inch of the place? Don’t think I ever intended punishing myself. -Nothing left to do here but think. And that some more.

Over the bed -a crucifix and a picture of Jesus weeping.

DOT is sitting in one.

DOT: Made her special.

MARJORIE: I’m having an affair with one of my professors.

MARJORIE: He’s fif -sixty. I’m his - toy girl. We do it everywhere.

MARJORIE: I meant to tell mother. I wanted to introduce them. So we could do it here.

MARJORIE: Had it all worked out. Made it all up. Invented all kinds of positions to taunt her with. Just for dying to see the look on her face. -Dying...- You know..-Doctor was told not to contact me until the last possible, moment.

MARJORIE: Given her the greatest amount of pleasure if she thought I would.

DOT: Honey..-I know. She was my dearest friend. But I can honestly say-

MARJORIE: She was an- unfortunate  woman. Grew up with that excuse. Littlest aggravation in a day, and it was her unfortunate  cross to bear.

DOT: Guess she did make alotta use of the word.

MARJORIE: Putting her wishes behind those of someone else’s -it was just in her unfortunate  good nature.

MARJORIE: Unfortunate -her home was too small. Unfortunate the town was so ignorant. Her life -appallingly unfortunate. Dreams -always out of her hands. Unfortunate her husband-

MARJORIE: And her daughter loathin’ her like that.. -Truly unfortunate now. -But you know -she saved it all for her own end. -Gave me this. -Wanted me to have it as a pillow cover. “..probably be the closest you’ll ever get to wearing one, honey.”

DOT: She had to be in great pain. She couldn’t have understood what she was..

MARJORIE: Looked me up and down. Said I still looked pathetic. In spite of being smart. “Shows smart’s not everything...unfortunately.”  -Such a long life. -..and you stuck by her.

DOT: Why wouldn’t I?

MARJORIE: As if you don’t know. I heard you two still-

MARJORIE: Mama never gossiped. Just said she didn’t quite believe the two of you kept any great distance between you. Always sounded afraid you might give in and forgive him one day.

MALCOLM: No one needs you here. I’m here.

LEE: I can see that. How long you here for?

LEE: ‘Cause you know your mama was powerful upset the last time you didn’t say good-bye.

LEE: -I’ll leave this here.   [he puts the cartons on the kitchen table]

MALCOLM: -I hate you.

LEE: Don’t even know me boy. Too busy hatin’ my reputation.

MARJORIE: No reason not to keep company with us. -Please. -You got enough food.

LEE: Think I could do more with something to drink.

DOT: Maybe we all could. Marjie? Some white wine around here..somewhere.

MALCOLM: ..-used to get sick over ginger ale.

MARJORIE: I used to wear pigtails. And live at home with my mother.

DOT: You’re here now though. And we’ll take good care of you. Of everything.

MARJORIE: Don’t need you bothering yourself over this.

DOT: No bother. Know how difficult tomorrow’s gonna get.

MARJORIE: Don’t know why. Just baggin’ everything. Gonna be Christmas right out that bedroom window.

LEE: Talk to Carlson yet?

DOT: We’re barely in the door.

LEE: Don’t want to leave that body out too long -especially in this heat. Move her later to the root cellar, if you like?

DOT: Can’t help but be gruesome, can you?

LEE: Just common sense. In the morning, I can run you over to the funeral parlor-

DOT: I’m sure Mal can do that.

MARJORIE: It’s all right. -Would you please?

DOT: Well..-Mal can meet you later- see if there’s anything else..

DOT: Never did know how you can eat that stuff..-..-deep fried grease and Lord knows what sauce..

LEE: Puts hair on your chest.

LEE: City’s doing well by you.

LEE: Ain’t that where you went? Hell- where else? Shines real bright from here. All that way off. Like a magnet for dreamin’. Ain’t that right?

MALCOLM: You say so.

MALCOLM: More than we know about?

LEE: No doubt in my mind. Never figured you for spending your days doing nothing.

LEE: No sir. Why, I remember all kinds of summers I could’ve used your help down to the garage. Always were too busy -needed here -needed there. Always proud you were popular though.

[MALCOLM gets up to leave.]

DOT: Where you going?

LEE: Only showing an interest.

MALCOLM: ‘Cause you got an audience?

LEE: ‘Cause things change. Time moves. -Been trying to make your mother see that.

MALCOLM: My mother’s seen enough of your-

DOT: Hate being talked about like I’m not in the room.